I painted this for our retiring, talented pastor of 31 years.  It was a big deal.  It was unveiled for him on his last weekend as one of his gifts of gratitude from the church.  He and his wife loved it.  Scroll for photos.


Steve Reeves is why I started REALLY wanting to go to church.  Back in the 90s, my heart was in a dark place.  I started going to Brownsburg Christian Church (now known as Connection Pointe Christian Church) at the recommendation of a friend.  As soon as I started listening to Steve, I knew I had found a spiritual leader that I so badly needed in my life.  Week after week, he taught me about the biblical account of Christ and how He wants us to live.  I needed this firm foundation, as I was drifting, spiraling, self-destructive.  Steve reminded me of my dad, very witty, intelligent, and direct.  When he talked, I was totally tuned in (and I have zero listening skills...big time ADD).  When he talked, he did not take just one point and belabor it.  He gave us good content to take notes on.  Food to get me through the week...  Purpose. Goals. Action. Boundaries. Love.  I felt sometimes he was talking straight to me, although actually he did not know me personally.  I slowly healed and my life has greatly improved.

One of the things he taught us is that we are made to serve and glorify God in our own unique way.  I was thinking, yeah, I'm trained as a nurse (obviously I could do medical missions), but God has wired me as a visual artist.  That is the area of my brain that works the best, and I'm very passionate about it.  How cool it would be if my art skills could be used to serve and glorify God.  Could it possibly make a difference in this world?  I was not sure how.  It does not feed the hungry, house the homeless, or treat the sick.  Art falls under the category of a "want" and not a "need."   This harsh world has some really desperate needs.  I asked God to find some use for my art skills.

Now, the story of the painting:

A couple years ago, as I was sitting 4th row center as usual,  I started thinking that there would come a day when Steve would retire (a day I rather dreaded).  I imagined how I would like to paint his portrait sometime, as a gift of gratitude for what he has done for me.  Well, his announcement came, and I mentioned to my husband Jeff what my idea was.  He said, "If that is something you want to do, you had better be saying something to someone!"  So I did.  I told my dear friend Brian Fike, who is also a employed leader at the church.  He liked the idea, and mentioned it to the elders and other key people at CPCC.  They looked at my website, and liked what they saw.  I met with elder Craig Hanson, and he shared his vision of a portrait of Steve and his wife Kristen together.  But, more meetings happened within those church walls, and then Teresa Byington asked me to do a collage of scenes of Steve baptizing people.

I was resistant at first.  Oh my, that is a LOT of little portraits in a complex composition.  No way could I do that in the time allotted.  I'm way too slow.  The stress of trying would make me crazy.  What if it turned out looking stupid?  The whole church would see it!  The thought was overwhelming.  Teresa gave me an out and said, "Well, if you could find one photo that sums up baptism, then we could just go with that."  She showed me online access to all the baptism photos from the past 4 years.  I perused those and found that I could not narrow it down to only one.  It became apparent that a collage would be necessary to describe all the stages and moments within the baptism experience.  A collage would also illustrate God's love for all ages, all races, and both genders.  This was the vision of my church.  I was offered the privilege to make it a real thing.  I've been well-trained for this moment.  And the Holy Spirit was talking to my brain.
"Let's do this."  Matthew 19:26

I sent a photoshop layout of photos in the best composition arrangement I could come up with to Teresa.  She said it was so good it made her tear up.  Uh oh, more confirmation that this is what I needed to do.
So, I did as I was taught by Steve.  I gave it to God.  I felt as though God was telling me to just pedal this bicycle, keep my eye on the road, and He would get me to the end.  He navigated.  Burdened lifted. He carried it.  I stopped worrying about it (mostly), but I still took this job seriously.

Getting Down to Work

I was fully focused and engaged.  I was told that Steve is quite humble and would not want the painting to be all about him and his own face.  So, I really wanted to make the painting be about the love and joy of being cleansed and becoming children of God.  Steve's images should be secondary to the moments he is assisting in.  I needed to visually capture Steve's work, but not glorify Steve.  I re-examined the brushwork of John Singer Sargent, who knew how to put paint on the canvas with accurate bravura.  I also studied all materials from modern day master Richard Schmid.  Every lunch break, I studied paintings by current masters of color and heavenly light... Zhaoming Wu, Dan Gerhartz, James Gurney.  Anytime I had a question, answers came.  Often they came while I was dreaming.  One night I could not sleep.  I turned on the most sleep-inducing show that I could think of, "The Joy of Painting with Bob Ross" (ya know, "happy trees" and all that).  It did not make me sleepy.  I watched him do some fancy stuff with a fan brush (while talking about God's miracles all around us, as Bob Ross often did in his soothing, whispery voice).  The next day, I picked up my fan brush and did something cool with it.  I also pulled out my notes from taking classes with Indianapolis artist Charlene Brown, and implemented some of the approaches she taught me.

My family members would come in every afternoon with a fresh eye, and give me their opinions for what was good in the painting, and what areas needed fixing.  I didn't always enjoy what they had to say, but they were right. Every. Single. Time.

Every session was started with prayer.  I played Spotify music, mostly focus instrumentals and contemporary Christian music.  I invited the Holy Spirit into my studio every time.  I needed help.  The large central figures were from a black and white photo that was pixely when I enlarged it, so I had to invent color and guess at some details.  It was so important that I get this right.


I became familiar with working on a surface that was new to me, the Raymar L64C belgian linen panel.  I tried some new colors, brushes, and mediums.  I improved on mixing flesh tones.  I learned more about simulating bright light.  I am more aware of value control, and it's importance in communicating the concept.  I am better at moving my eyes around so that my eyeballs don't play color-perception tricks on me from staring at one color for too long. 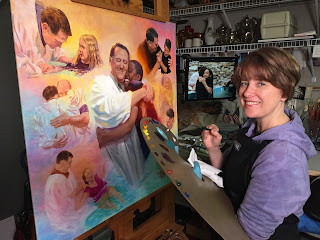 I learned how to quit goofing around on the internet so much, and get into that studio and start treating my painting career like it's my job.  I developed a solid routine for setting up in the morning and shutting down in the evening.  I discovered that too much exposure to solvents is bothersome to my airways, so I learned how to minimize that.  I was too focused on the painting to feed my sugar addiction, and now I crave it less.  While pushing paint around, I had time to think and pray and work through some personal issues.  My standing muscles got stronger.  I learned to trust God more.  I became braver.  I slayed some giants.

Ultimately, I participated in the creation of a unique and personal gift for Steve and Kristen, who deserve it.  I finally found an opportunity to serve with my artistic skills.

The following video was filmed by my daughter Alyssa (thanks sweetie!).  I was too nervous.  I just wanted to watch the moment.

Okay, I must insert here that it was surreal seeing my own easel with my painting on it up on that stage, and hearing my name mentioned by Greg Moore in front of the whole church.
After the ceremony, once they figured out who did this, I got big warm hugs from the Reeves.  Steve said he loved it, and would cherish looking at it everyday from this day on.  He said he was blown away, and that it could not have been more perfect.

The next day, their son Nate told me that, at first glance, Steve did not even notice himself in the painting.  All he saw was the baptism scenes.  That thrilled me, because that meant that I had successfully communicated the concept that I intended to.

Thank you so much to Teresa Byington and Laura Basso for your kindness and availability to me, and for your moral support and patience with all of my questions and crazy requests.

Thanks also to my husband Jeff, and my kids Jake and Alyssa.  You were awesome throughout, with hugs, taking over (most) domestic chores, and lugging my equipment when necessary. 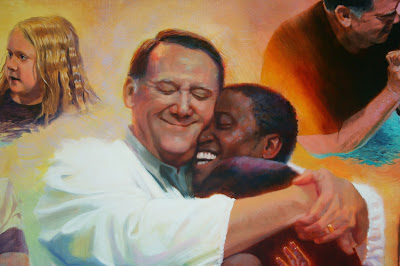 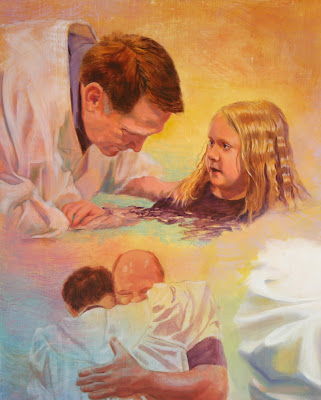 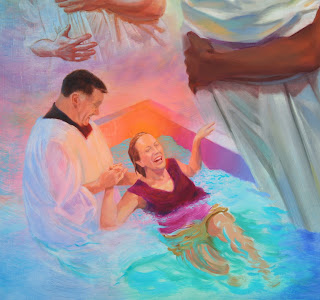 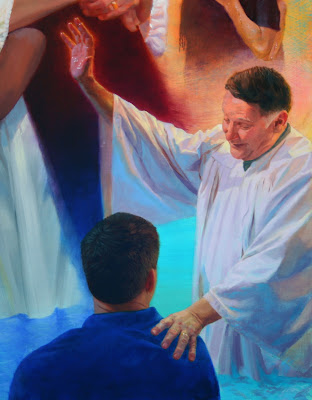 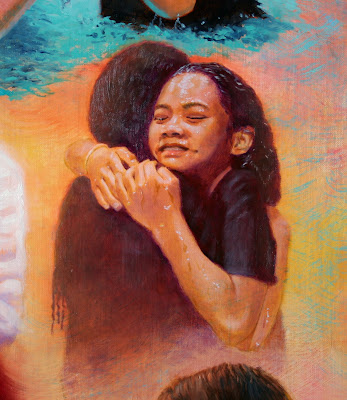 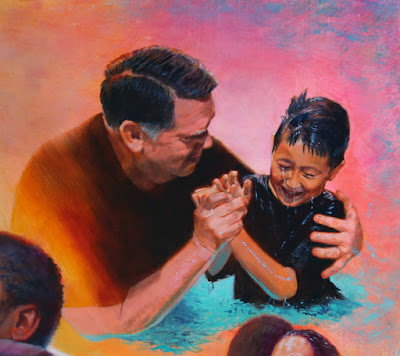 It's on to the next thing now... right after I clean my house.